The Courage of Esther for Such a Time as This

When Esther, queen of Persia, appeared before the king to speak out on behalf of her people, she did so at the risk of her life. As a young peasant woman, she had won the king's heart and attained the influence, comforts, and personal security that accompany royalty. Esther’s integrity, however, was not corroded by privilege. She was prepared to lay everything down – even life itself – for the greater cause.

And so will I go in unto the king, which is not according to the law: and if I perish, I perish. Est 4:16

Esther had an almost fairy-tale ascendancy to the throne. The king of the land, in search of a new bride, chose Esther from hundreds of hopeful, young maidens. Her beauty and grace captured his heart and she stepped from obscurity into the high estate of royalty. As Esther became accustomed to the ease and dignity of royal life, one might have expected her to hold on to what she had at any cost. What possible reason would there ever be to ‘rock the boat’ or risk what had fortuitously become hers? 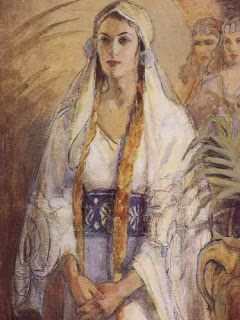 Mordecai raised Esther well. He didn’t gift her with beauty. That was her natural inheritance. And while he had no earthly riches with which to establish his young, orphaned cousin, Mordecai did substantially invest in her. When a rare opportunity arose for a common girl to become queen, Esther stepped forth with more than her natural beauty. Thanks to Mordecai’s tutelage, she appeared on Persia’s stage with a poise beyond her years, a strong connection to her Jewish heritage, and a stockpile of the faith especially reserved for the poor of this world.

And the king loved Esther above all the women, and she obtained grace and favour in his sight more than all the virgins; so that he set the royal crown upon her head, and made her queen instead of Vashti. Est 2:17

Esther rose to prominence in Persia (circa 500 BC) for a purpose she had yet to discover. She came to the kingdom at a divinely appointed time in order to expose a conspiracy against her people and to help deliver them from certain destruction.

The church has been gifted with heavenly beauty and she has become influential in the kingdoms of men. She too has been invited into the highest spheres of influence. At an individual level, many Christians in the West enjoy social acceptance, career success, financial security, and political influence. We are, like Esther, in the royal courts. Like the Jews in Esther’s day, Christians have flourished. Like the Hebrews in Moses’ day, Christians have become numerous in the land.

Christians may have different perspectives on moral issues. There may be room for debate and interpretation on certain matters. And then there are ‘line-in-the-sand’ issues. These are matters of deep conviction and moral certainty for Bible-believing Christians and they serve to separate the sheep from the goats. In Mordecai’s day, the line in the sand was bowing down to an egotistical official, named Haman. Today, the line in the sand is ‘same-sex marriage’. The term itself is a misnomer. Marriage is, and can only be, between a man and a woman.

Homosexuality is a lifestyle choice that is permitted in modern, secular societies. And, at least in Australia, homosexual civil partnerships have the same rights and protections as married couples. This extends to property, parental, and estate rights. [1] Little wonder that many homosexuals have no interest in marriage. In November 2015, Ireland redefined marriage to include homosexual couples. By the end of 2016, just 0.8% of Ireland's estimated 282,000 homosexuals had opted to marry. [2] With legal equality and community acceptance for homosexual relationships, why then do gay and lesbian (LGBTIQA) lobby groups have their sights so persistently set on marriage?

Noisy LGBTIQA lobbyists would have the public believe that the redefinition of marriage is a noble cause for human rights. The redefining of marriage, however, is all about securing a symbolic victory. When French revolutionaries captured Bastille in 1789, it was a symbolic victory. The occupation of the royal fortress by the revolutionaries announced the end of the old order. In the same way, the wresting of marriage by homosexuals – wherever it takes place in the world – signals the collapse of the Judeo-Christian order. This is what the redefinition of marriage is really about. Wherever it has taken place, the freedoms of speech and religion have been diminished, traditional family units have been undermined, and nonsensical gender fluidity theories have proliferated. The aggressive LGBTIQA agenda is surreptitiously setting conscientiously-objecting Christians on a collision course with the state.

The antagonist in Esther’s day was a man named Haman. He was not content with civil respect and appropriate recognition of his position. He craved obeisance. He did not feel secure unless he had the fawning worship of the people. When Mordecai could not (for fear of God) bow his knee to Haman, his humble and conscientious objection was misread as a personal and defiant rejection of the man himself. The insecure and raging civic leader became irrationally punitive and set out to kill a good man – a man who had prepared a beautiful and graceful future queen and a man who had once even saved the king’s life. Mordecai was a man of conviction and his peaceful, conscientious objection to an immoral law was framed as sedition, warranting the death penalty. 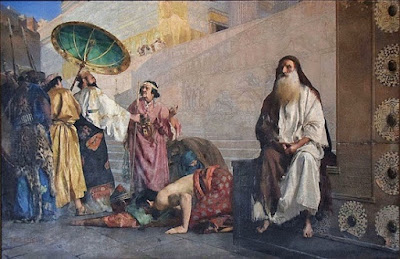 Not content to just destroy Mordecai, Haman set out to eradicate the entire ‘troublesome’ race of Jews. Haman could not and would not tolerate dissent, no matter how peaceful the protest. His position must be celebrated and applauded. He was not satisfied with appropriate civic recognition. He demanded worship. And he raged and plotted when he didn’t get it.

When Haman saw that Mordecai neither bowed down nor paid homage to him, Haman was filled with rage. But he disdained to lay hands on Mordecai alone, for they had told him who the people of Mordecai were, therefore Haman sought to destroy all the Jews, the people of Mordecai, who were throughout the whole kingdom of Ahasuerus. Est 3:5-6

Little did Haman know that Mordecai’s race included the queen herself, and it was her courage that would deliver God's people and bring about Haman’s demise. Haman would ultimately hang on the gallows he prepared for Mordecai.

Mordecai’s reproach is felt by good people today. The redefinition of marriage to include homosexual unions is being loudly declared as the progressive, enlightened path. Dissent to the clamouring demand for ‘marriage equality’ is proving costly. Australian tennis legend, Margaret Court, has endured public ridicule and threats to remove her name from a Melbourne tennis arena because she dared to voice disagreement to the redefinition of marriage. Coopers Brewery was pressured into a snivelling, public apology for its product’s placement in a public (and polite) conversation between two politicians about the redefinition of marriage. Seventy ordinary Australians were physically jostled and ultimately barred from attending a public lecture by a Sydney University academic who voiced concerns about gender fluidity theory. Christians are increasingly being pressured to applaud the agenda of the homosexual lobby or remain silent. Respectful tolerance and civil recognition of homosexual unions is not enough. You’re either an enthusiast for redefining marriage to accommodate homosexuals or you are homophobic and bigoted.

And Jesus answered and said, “Have you not read that He who created them from the beginning made them male and female, and said, ‘For this reason a man shall leave his father and mother and be joined to his wife, and the two shall become one flesh’? So they are no longer two, but one flesh. What therefore God has joined together, let no man separate.” Matt 19:4-6

It is not an option for Bible-believing Christians to be enthusiasts of ‘same-sex marriage’. In a brave new world of ‘same-sex marriages’ and everything else that follows, will we become, by default, enemies of the state? Are Christians being corralled, by a treacherous minority, into a collision course with the authorities? Governments do not want enmity with Christians. Christians are the salt of the earth. Bible-believing churches underpin peaceful and stable societies and Christians lead the way in serving the poor and disadvantaged.

Unfairly falling foul of the governing authorities is not new for God's people. Years before Mordecai and Esther, another Persian king was hoodwinked by a devious cabal. King Darius found himself pitted against his most loyal servant in Daniel, thanks to a small group of conspirators. Hundreds of years later, the Prince of Peace himself was crucified by an unwilling Roman governor held to ransom by a cunning, Pharisaical faction. In modern times, governments have also shown susceptibility to being manipulated by pressure groups to the detriment of decent, hard-working, salt-of-the-earth types. Mordecai, Daniel, Christ our Lord – none of these men were looking for trouble and neither are Christians. We are decent people who live according to our convictions and we have a preserving and refining influence in society. 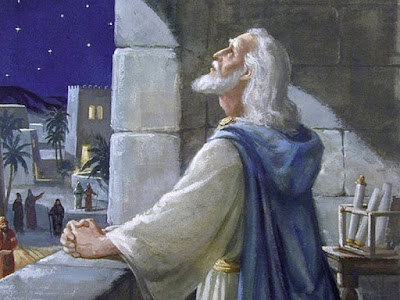 The story ends well for Mordecai and Esther and their countrymen. “When the enemy comes in like a flood, the Spirit of the LORD will lift up a standard against him.”(Isa 59:19). While Haman plotted and schemed, he hadn't counted on two things. Firstly, there was a Jew in the highest office of the land. Haman didn't know that the beautiful Esther, in whom the king's heart was enthralled, was none other than a Jewess and therefore the target of his rage. And secondly, Haman didn't realise that this hidden, beloved woman of Mordecai's race would have the courage to reveal herself and put everything on the line to save her people.

There are Esther types today in all spheres of society. They can read the writing on the wall and they can see that Bible-believing Christians have fallen foul of a ruthless LGBTIQA lobby. At some point they will have to make an Esther type decision. Will I speak out and be labelled a bigoted, outdated, enemy of progress and equality? What if I offend people I care about? What if I damage my reputation? What if I sabotage my career? What if I make myself a target? Surely God has not gifted me my enviable station in life for me to throw it all away because of an opinion on marriage? Is it an opinion or is it a conviction? Are we people of conviction or convenience? As was the case with Esther, so it is with us. God has indeed placed us in our current callings and places of influence for such a time as this. May we rise to the occasion.

Then Mordecai told them to reply to Esther, “Do not think to yourself that in the king’s palace you will escape any more than all the other Jews. For if you keep silent at this time, relief and deliverance will rise for the Jews from another place, but you and your father’s house will perish. And who knows whether you have not come to the kingdom for such a time as this?” Est 4:13-14

Email ThisBlogThis!Share to TwitterShare to FacebookShare to Pinterest
Labels: Call to Discipleship

By the grace of God ... a servant, friend, and brother of Christ Jesus. Husband of the beautiful wife of my youth. Father of five precious children. Worshipper, preacher, writer, pilgrim.